The Picture They Wouldn’t Publish 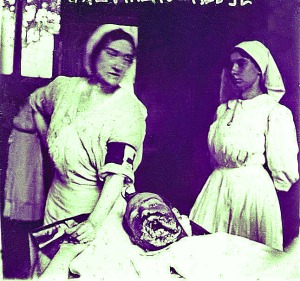 Here is the picture the publisher, McFarland & Co., refused to include in Easing Pain on the Western Front, my study of the American and Canadian nurses of World War I.  It was taken in a French field hospital in 1918, and shows a Red Cross nurse clasping the hand of a French soldier, a poilu, most of whose face has been blown off by artillery. She gazes outward stoically, as if to say: “Yes, I am a nurse, and this is the kind of boy the ambulances bring to us during the rushes.  Soon the surgeons will decide whether he will live and whether they can do anything for him.  For now I hold his hand.”  A more junior sister stands beside her and bears witness.

Why did the publisher exclude this powerful image from a book about the nurses of the Great War?  I was told the problem was one of image quality, viz.,   the picture did not reproduce at 300dpi and was pixelated. So it had to go.

Earlier I had made the case for including WWI photos of nurses in action that did not meet the publisher’s quality threshold in this way:

Not all books are created equal; not all pictures are created equal; and not all pictures are equally relevant to the story an author tells.  Criteria of inclusion should accommodate, at least to some extent, subject matter and narrative.  In the context of this particular book, I find it difficult to imagine anyone finding fault with the publisher for including rare and graphic images, never seen by anyone except a handful of medical historians, that  illustrate – and do so poignantly – my central arguments about the emergence of scientific nursing practice on the Western front.  Certainly, should McFarland choose to allow a small number of lower resolution images, I would gratefully acknowledge the publisher’s kind accommodation in the interest of a more vivid historical presentation.

With the photo at issue, however, I was unavailing.  After all, the publisher opined, it would be criticized, presumably by reviewers, for including such a low-resolution photo in one of its books. Really?  If any of my readers know of a single instance in which a book publisher has been criticized in print for including a rare, low-resolution period photo in a work of history, please let me know.

Now the photo is graphic and unsettling.  Was the subject of the photo the underlying reason the publisher excluded it from the book?  Probably not.  I do think, however, that the horrific image of a faceless soldier fortified the resolve  to exclude it on”low resolution”grounds.  But it is precisely the nature of the picture – what it shows us – that speaks to the subject of this particular book.  I sought its inclusion not as yet another depiction of the horror of modern mechanized warfare, a reminder of what exploding artillery shells do to human faces at close range.  Rather, the photo provides poignant visual representation of a Great War nurse in action, of the steadiness and steadfastness with which she faced up to the care of the faceless.

Even more to the point, the photo shows one key instrument deployed by nurses in this war and, to some extent, all wars: the hand. We behold the nursing hand as an instrument of stabilizing connection, of calming containment.  Easing Pain examines the many uses of the nurse’s hand in diagnosis and treatment.  To which the hand as instrument of touch-mediated attachment must be included. Seen thusly, the photo is a wartime embodiment in extremis of touching and being touched as a vehicle of therapeutic “holding” in the sense of the British pediatrician and psychoanalyst D. W. Winnicott.  The role of the hand in nursing care antedates and postdates the era of nursing professionalization.  I explore the topic at length in my previous book, In the Hands of Doctors:  Touch and Trust in Medical Care.

Here then is the context in which the photo would have been introduced.  References to the nurses quoted therein may be found in the book.

Nursing hands also monitor the nurse’s own performance, especially the acclimatization of new nurses to the demands of the reception hut.  Shirley Millard reports how her hands “get firmer, faster.  I can feel the hardness of emergency setting in.  Perhaps after a while I won’t mind.” More importantly, nursing hands stabilize soldiers whose fear and pain off the battlefield leave them overwhelmed and child-like.  With soldiers who arrive at casualty clearing stations in surgical shock, massive blood loss is compounded by sepsis, pain, and anxiety, making it incumbent on nurses not only to institute stabilizing measures, but to make the soldier feel “he is in good and safe hands.” Touch is a potent instrument for inducing this feeling.  Soldiers clutch hands as they ask, “Is it all right?  Don’t leave me.”  But it is usually not all right, and it is the nurse’s hand that provides a lifeline of human attachment to relieve a desolation that is often wordless:  “Reaching down to feel his legs before I could stop him, he uttered a heartbreaking scream.  I held his hand firmly until the drug I had given him took effect.”  When panic overwhelms and leaves soldiers mute, the hand communicates what the voice can not:  “He seized my hand and gripped it until it hurt . . . He looked up at me desperately, hanging onto my hand in his panic.”  The hand offers consolation when there are no words:  “The bandage around his eyes was soaked with tears.  I sat on his bed and covered his hand with mine.”

The nurse’s hands mark attachment and impending loss.  Soldiers become terrified at the time of surgery.  The reality of amputation, the painful aftercare it will entail, and the kind of life it permits thereafter can be overwhelming.  It is 1915, and the American Maud Mortimer is in a field hospital at the edge of Belgium, only five miles from the firing line.  A patient with whom she has connected, “Petit Pere, is about to have his leg amputated.  He makes her promise that when he comes around from the anesthesia she will be there, and that she will “hold his hand through the first most painful dressing.”  The amputation complete, he gazes up at her:  “Hold my hand tight and I will scream no more.”

But the attachment can transcend treatment-related trauma and become perduring.  Now it is April 1918, three years later, and a pause in the action permits Helen Boylston’s hospital to ship 26 ward patients to England.  One of her patients, Hilley, begs her to let him remain.  “I went out to the ambulance with him,” she recounts, “and he clung tightly to my hand all the way.  I almost cried.” Such separation, with the hand clinging it elicits, reminds us that a wounded soldier’s parting from his nurses can be a major loss, even when it is a prelude to greater safety and fuller recovery. The vigorous hand clinging of the living, even in loss, is far preferable to the enfeebled squeeze of the dying.  With the latter, the nurse’s  hand becomes an instrument of palliation, interposing human touch between living and dying, easing the transition from one to the other:  “I held his hand as he went . . .  Near the end he saw me crying and patted my hand with his two living fingers to comfort me.” Expressions of gratitude and affection, hand-communicated, are part of the process.  The hand continues to communicate as the body shuts down:  “He was ever so good and tried to take milk and food almost up to the end but he was unable to speak and not really conscious, though he could hold my hand and squeeze it which was so sweet of him.” 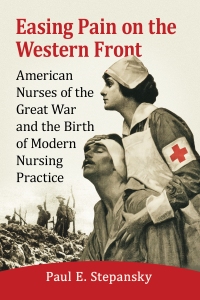 READ THE PREFACE TO EASING PAIN ON THE WESTERN FRONT HERE

PAUL STEPANSKY IS FEATURED AUTHOR IN THE

Copyright © 2020 by Paul E. Stepansky.  All rights reserved.  The author kindly requests that educators using his blog essays in their courses and seminars let him know via info[at]keynote-books.com.